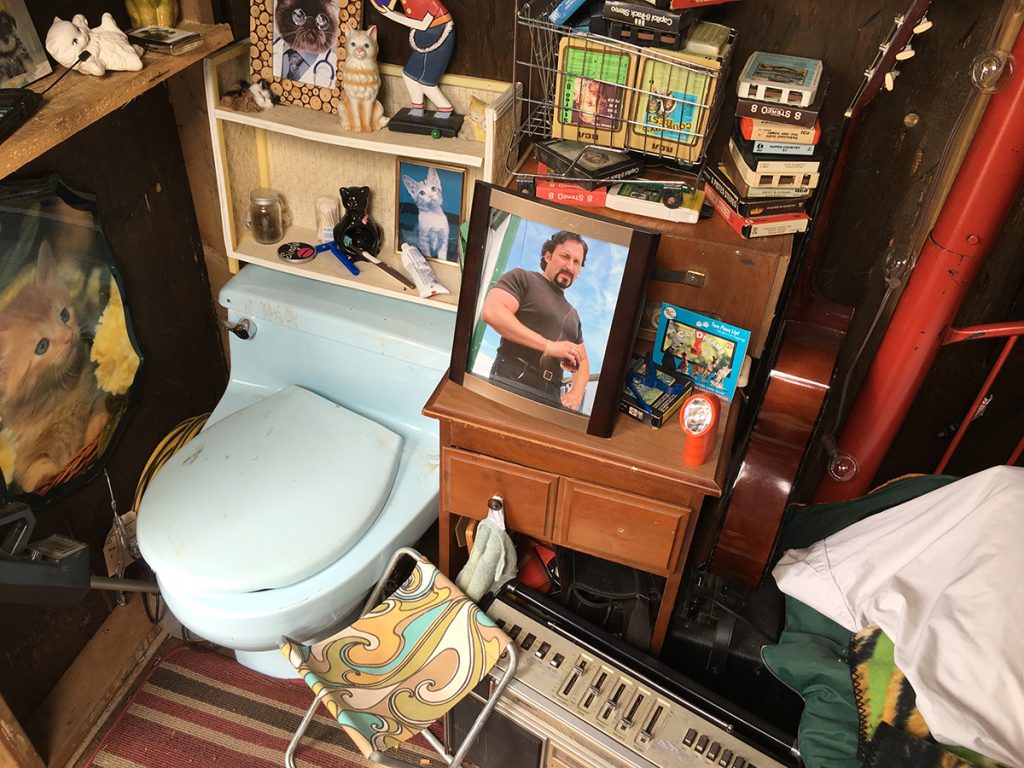 The camera dicks are back in Sunnyvale for the filming of Trailer Park Boys Season 12.  While their cameras are mainly focused on the drunk-n-stoned antics of Ricky, Julian, and Bubbles, there are other parts of Sunnyvale that are just as key to the success of Trailer Park Boys (no, we’re not talking about Cory and Jacob, nobody gives a flying fuck about Cory and Jacob).

The homes and art direction of Sunnyvale are jam-fucking-packed with character, and are often huge pillars of the schemes and stories of Ricky, Julian, and Bubbles.

James Kennedy has played a part in the look and feel of the park since Season 6 of Trailer Park Boys. 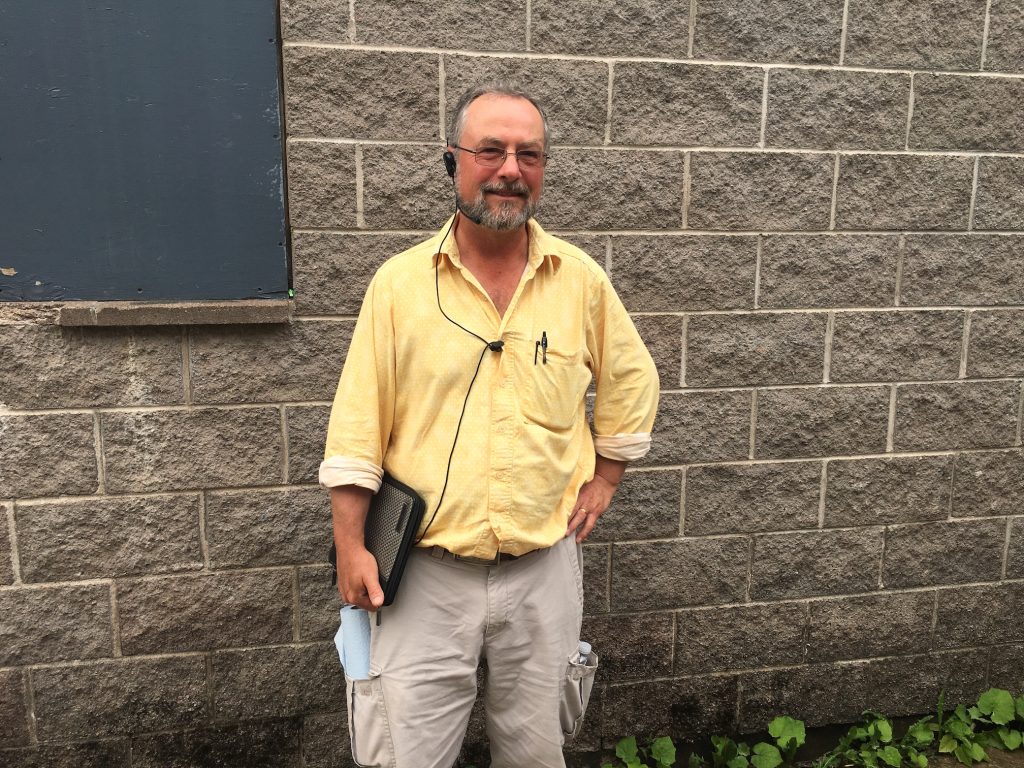 James Kennedy has been making Sunnyvale look like shit since Season 6.

It doesn’t take rocket appliances to know this, but working for the Trailer Park Boys is completely fucking different from a lot of other productions.  Kennedy has to contend with all kinds of unique issues — take the fury of Ricky’s clearing stick, for example.

“When a toaster oven hits the ground, it’s good for a couple takes,” explains Kennedy.  “After that, you’re basically picking it up in both arms and then setting the pieces back on the hood and making it resemble what used to look like a toaster oven for the forth or fifth take. It just goes downhill from there. But that’s a lot of fun.”

The residences of Sunnyvale are not your average dwellings, either.  Bubbles lives in a shed, for fuck sakes.  Julian has lived in a shipping container, and Ricky spent most of his life living in his car.  But since Season 8, the Boys have found themselves in a cozy little compound with Ricky’s trailer sitting across from Julian’s trailer, and Bubbles’ shed is tucked nicely between the two.

Julian’s priority is money, and he is constantly chasing the Freedom-35-oh-fuck-Freedom-45 dream.  This is reflected in the layout of his trailer, which usually resembles a business and not a home.

“Julian’s place keeps evolving,” says Kennedy.  “It was a country saloon one year, a beauty salon another year. It was all painted pink that year.”

While Julian was spending time by the ocean in Season 11, Bubbles transformed the trailer into a pizza sauce factory.

“Bubbles had a conveyor line for the pizza sauce, a bottling station, turntables, beautiful labels. He goes all out, Bubbles, when he has a business proposition,” says Kennedy.

The SwearNet art department dicks are always happy to help the Boys when it comes to boosting the look and feel of Sunnyvale.

“The art department started putting it together a few weeks before we commenced filming,” says Kennedy. “The process involves acquiring things, brainstorming stuff, defining the basic look, and then it’s a question of collecting things.”

Collecting “things” for the Sunnyvale set can happen out of the blue.  Kennedy remembers a bit of seren-fuckin-dipity from Season 6 when the camera dicks were setting the stage for the search for Oscar Goldman, Trinity’s chicken.  On their way to lunch, they found a penis-shaped mushroom on the side of the road.

“We said ‘oh we gotta use that’ and I preserved it in a paper bag through lunch.  When we shot the scene, Ray found the penis-shaped mushroom, held it up, and said ‘A cock is a male hen, we’re on the right track Boys!'”

“When you find a mushroom that’s shaped like a cock, boy, I guess you gotta use it,” declares Kennedy.  “A gift from nature for sure.”

Before Ricky was falsely advertising Nathan MacKinnon for his hockey camp at the local rink, he was running hockey lessons out of his own trailer. 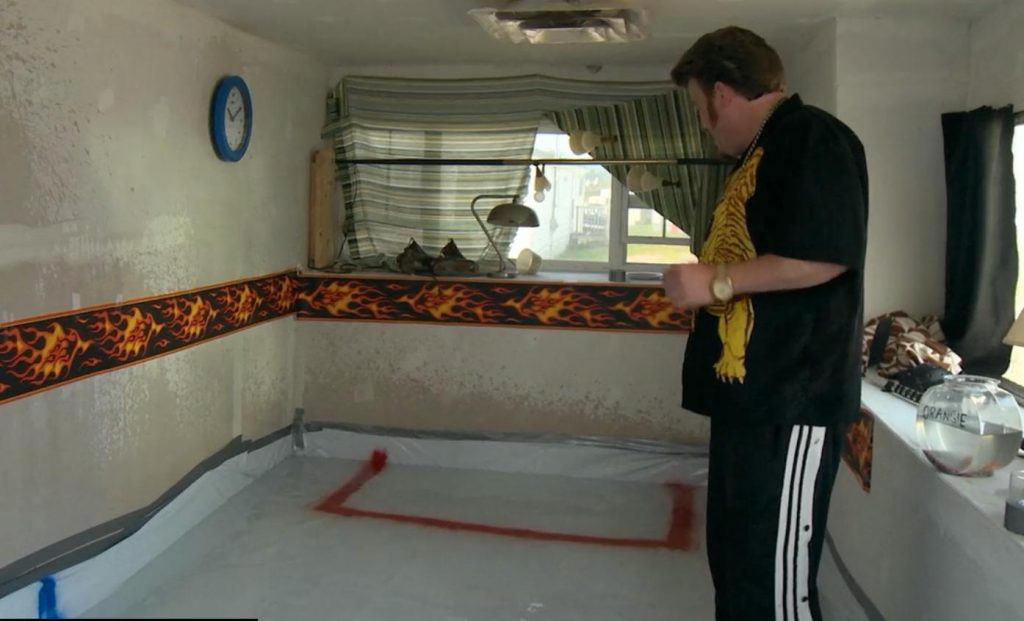 “That was a neat decor,” says Kennedy. “We had boards around the inside of his trailer, a blue line and red line on the ice, it was a lot of fun.  Everybody’s seen hockey games, we know what rinks look like. We just did it Ricky style.”

Kennedy points out that Ricky’s trailer has undergone some changes ever since the gramson came into the picture.

“Sarah’s kind of taken things in hand, she’s working with Trinity to make it baby-friendly,” says Kennedy. “There’s a nice couch and television. It’s gotten a little more homey. There’s still Ricky in there – there are little messes everywhere, but it’s nice.”

A Shed and a Borntday

Bubbles shed has also seen some changes over the years.

“He keeps a cozy little shed, it’s mostly a cat-themed decor,” says Kennedy.  “It’s got his bunk beds that he has always had. He sleeps in one and keeps stuff on the other. I guess one of the major additions on the top bunk is a major ghetto blaster that he got from Snoop Dogg a couple years ago and that’s an impressive piece of equipment.” 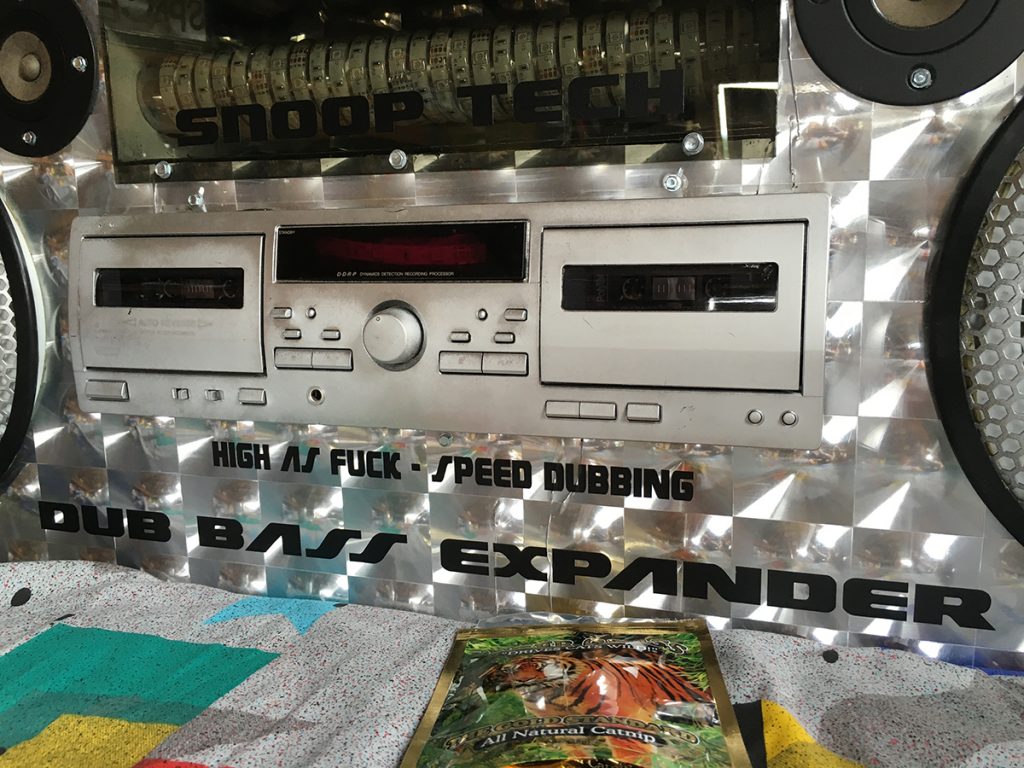 Kennedy has a particularly fond memory of Bubbles’ shed, or more specifically, the honey oil refinery from Season 8.

“It was the year I turned 50 during the show. Bubbles was explaining how he was using rice cookers to aid in the oil process.  Ricky said ‘It’s that easy?’ Bubbles said ‘yeah’ and then he whipped the camera around to me and said ‘But you know the best part? That cocksucker James Kennedy turned 50 today’ and it shocked the hell out of me. The crew sang happy birthday and that was a great fuckin’ way to turn 50. Finished the bottle of Macallan he gave me that night.” 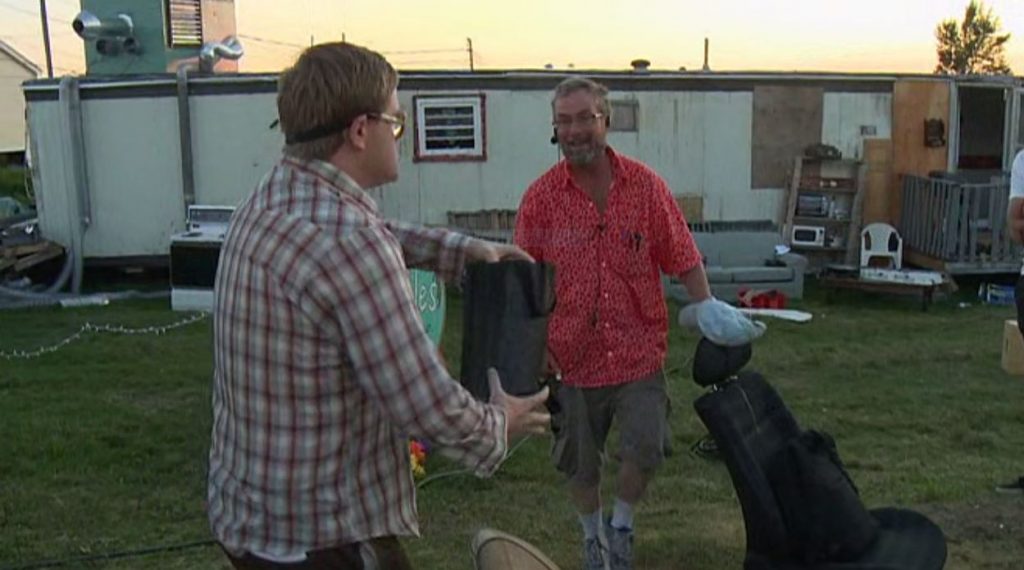 Bubbles gives James a birthday bottle of scotch (from the Season 8 DVD extras).

← Now on iTunes and Libsyn – Ricky Lost the Recipe for Ice
New on swearnet.com – Explorers →