I’m a workin’ man, I am! Ricky wants a change of career – but should he become a male prostitute, crash test dummy, or start a shitty new business? Also: Danger kitties, tree banging, and the latest space news!

On today’s bulging Mailbag: No Robb today, but Terry Freeland is here to help JP and Mike out. There’s cat piss soda, a snack stack of glory, and a shitty mystery to solve! Just how baked are you boys today?!

Park After Dark – Ronnie Pumpkin Is Hard As Fuck

Poor Bubbs has kitties on his mind on today’s Park After Dark – is Stumpy gonna make it? Julian has found Randy the perfect mate, and Ricky wants to wrestle an emotional support alligator. Fuck, those shrooms are really kicking in today, Boys! 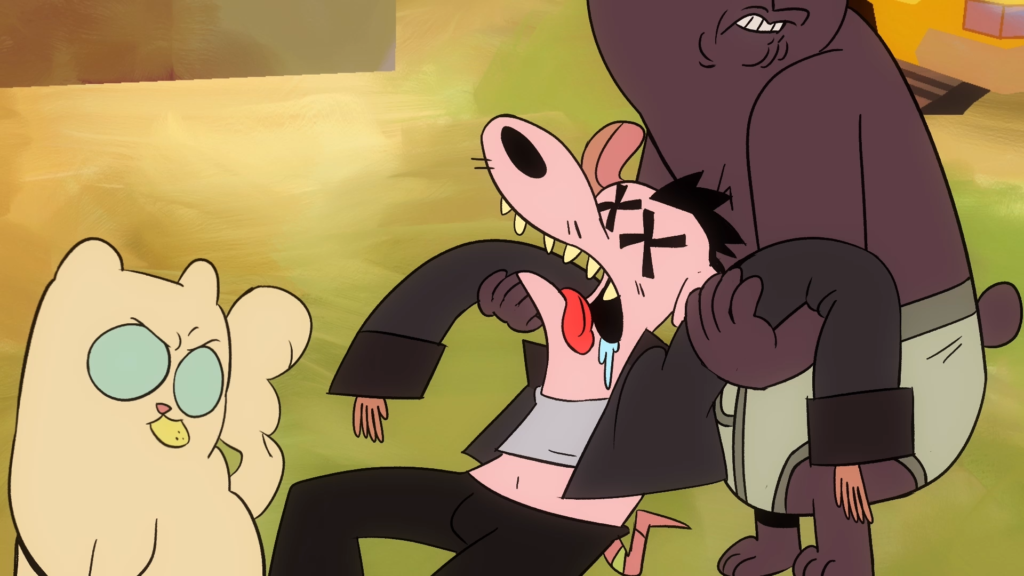 On this week’s more-fuckder-than-fucked Trailer Park Cats: Cyrus is back in the park and he’s not fucking around. But look the fuck out dickweed, Randy’s pants are coming OFF!

There are sea shanties, and then there are sea shanties about kitties sung by the Trailer Park Boys. THIS is that sea shanty!! Not to be outdone by Scottish musician Nathan Evans, who has roared to TikTok fame with his ‘Wellerman‘ sea shanty, Bubbles, Ricky and Julian present ‘The Kittyman’ – a rousing tale of kitties and catnip! Ya think the Boys can get a recording contract and hit the charts?! Fuck YEAH!!!

Attention Greasy Money gamers, we have ANOTHER event for you this week! Bubbles is on a quest to find the nicest kitty in Sunnyvale Trailer Park… which pussy will win Best in Show? Tune in to our latest Event at 2PM PT, Thursday September 20!

The Boys often worry about offending their lady guests, but they can be themselves on the latest episode of the Trailer Park Boys Podcast because their guest is a chicken finger-eating, whisky-drinking, kitty-loving musician named Elise LeGrow!

The Boys pour LeGrow some Liquormen’s and they chat about her collaborations with Ron Sexsmith, as well as her upcoming album Playing Chess, where she rips out some DECENT covers from the Chess Records catalogue.  Bubbles brought his guitar, and he accompanies her for a live performance!

They also chat about KFC bath bombs, gay lions, and who would win a hypothetical battle between a coywolf and a raccoon dog!

PLUS: Ricky has a plan to snack during the podcash but not make any annoying chewing sounds… and it is FUCKED!

The camera dicks at SwearNet hooked Bubbles up with a 360 camera and he’s taking it for a spin.  And where in the fuck do you think he’s going to set up shop first?

Only the most DECENT shed on the planet – that’s where!

Take a tour of the Sunnyvale homestead with Bubbles as your guide, and have a look at what he keeps in there. If you’re asking ‘will there be a kitty cameo?’  – all we can say is ‘does the tin man have a sheet metal cock?’

New on swearnet.com – Ask Me Fucking Anything with Bubbles

The SwearNet camera dicks caught up with Bubbles on the set of Season 12 and got him to do an Ask Me Fucking Anything!

Bubbles answers questions about the ladies of the park, how to deal with bullies, what it would take to go on a cart-hauling date with him, and who he’d bring with him to the moon.

PLUS: Some fucking dickweeds gives Bubbles shit about his glasses and he doesn’t take to kindly to their stupid fucking question!