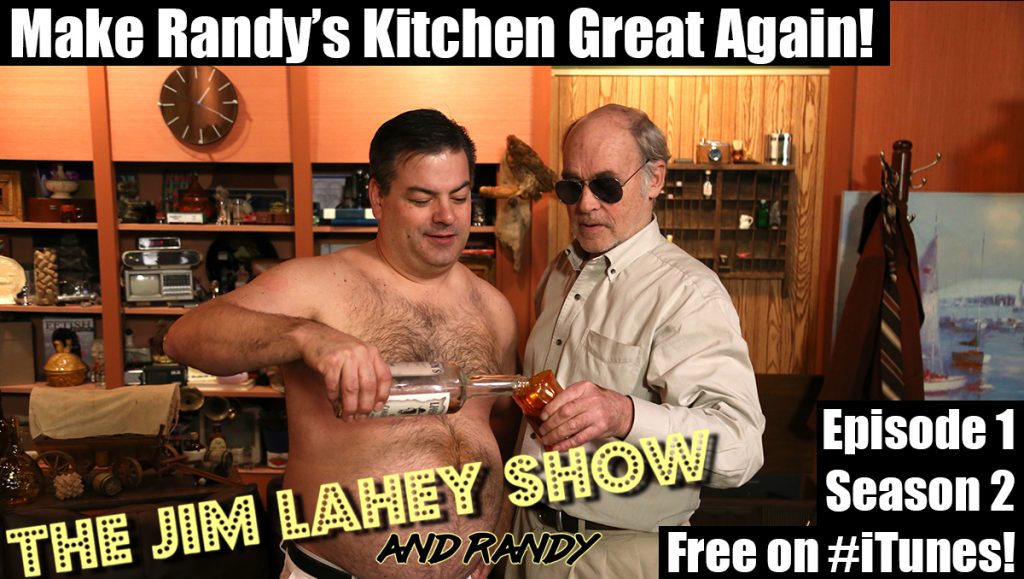 Now on iTunes & Libsyn – If a Chicken Can Do It, Can Ricky? 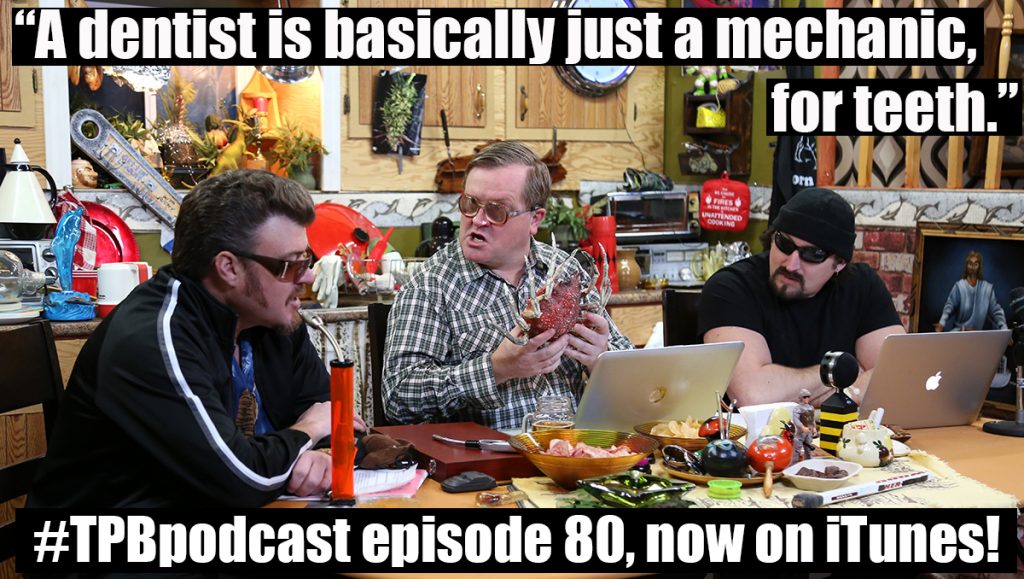 Ricky has big musical dreams on the latest episode of the Trailer Park Boys Podcast, now available in audio form on iTunes and Libsyn!  Inspired by a YouTube video of a chicken playing piano, Ricky figures it can’t be that hard and hopes to eventually be good enough to become a Shit Rocker.

But that’s not Ricky’s only professional aspiration.  He’s also thinking about trying his hand at dentistry, after all, they’re basically just mechanics with teeth, and we know from Gettin’ Learnt with Ricky that he is handy with a power tool.

We also learn the origins of the phrase “Milk and Honey,” the difference between a spider and an octopus, and the invention of rum and coke.

Podcash episode 80 is brought to you by the merch dicks at TrailerParkBoysMerch.com! 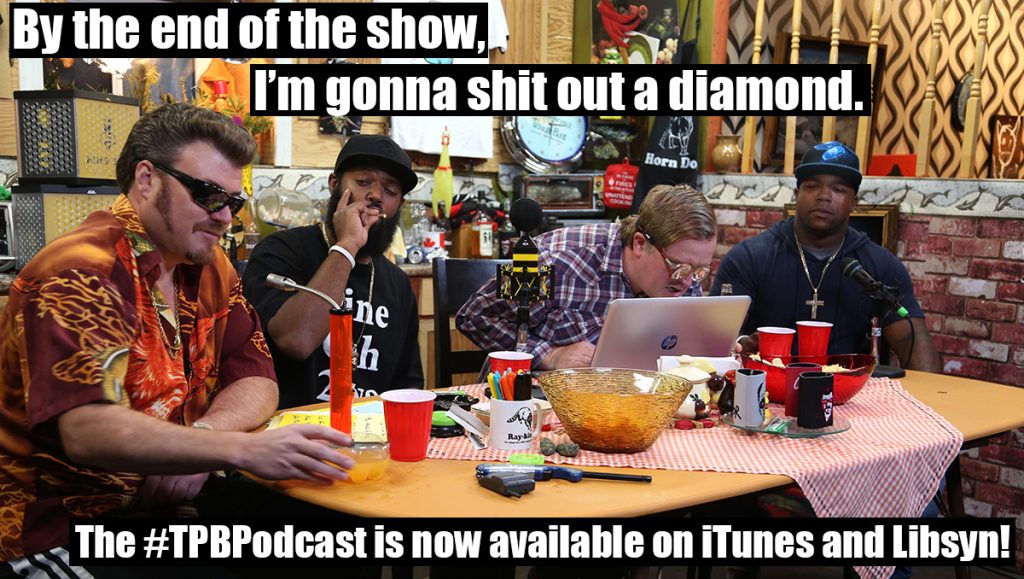 The latest Trailer Park Boys Podcast is now available for free on iTunes and Libsyn!

Julian is off getting drunk celebrating the birthday of Ralph Macchio (at least, according to Ricky), so T and Rascal from the Roc Pile are filling in!  Learn about T’s cross-Canada Sunnyvale Liquor Tour, and whether or not they’re still in touch with the J to the R-O-C.

Episode 66 is brought to you by the Official Trailer Park Boys Store, and Neat ‘King Bee’ microphones! 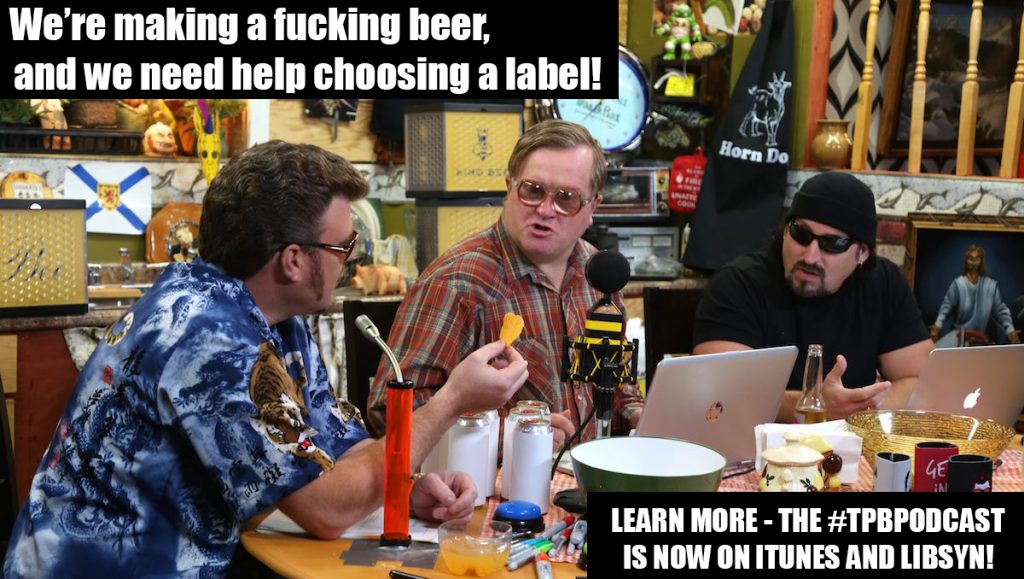 Now on iTunes/Libsyn: Randy and Lahey Have Summoned the Shit Hawk! 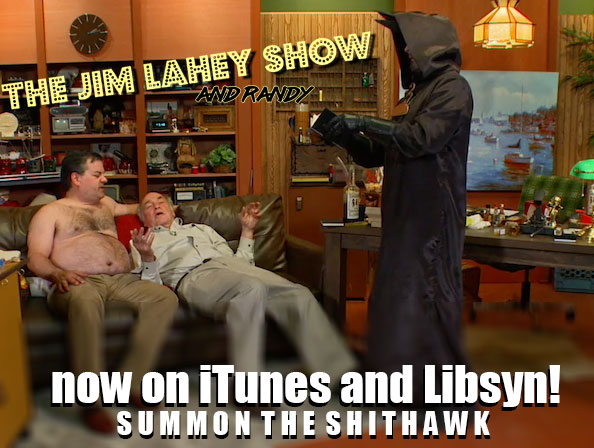 The SHIT HAWK is real – and he has been summoned!

Episode 8 of The Jim Lahey Show and Randy is now available in audio form – free of fucking charge – on iTunes and Libsyn!  Behold as the liquor wicker basket takes control and Randy and Lahey are visited by a shitty apparition.

Plus – Randy teaches us how to cook liquorball sandwiches! 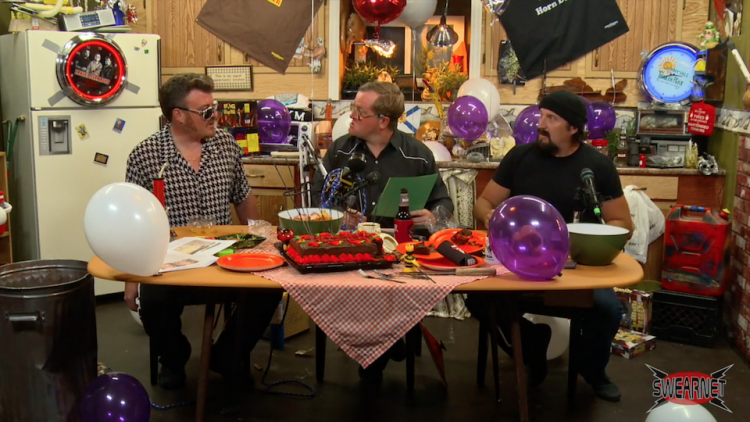 One year of fuckin’ podcasting!  The Trailer Park Boys are celebrating a very special borntday, and you can now listen to the celebrations for free on iTunes and Libsyn.

Enjoy a trip down memory lane as the Boys talk about the highest they’ve ever been on the podcast, as well as the many times Ricky has injured himself!

If you’d like to get some behind-the-scenes insights from the fucked crew that films and promotes the podcast, check out the blog post here! 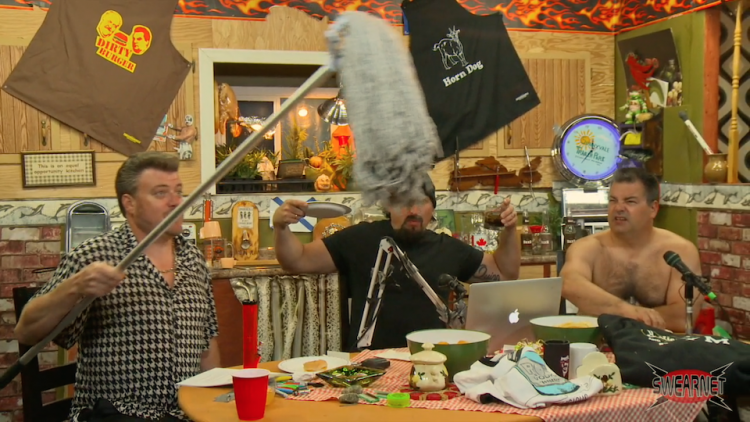 Fuckin’ Randy.  Bubbles is still out of town and he served up another guest host to replace him – the the crown prince of cheeseburgers himself!

Now available for an audio download on iTunes and Libsyn, Randy joins Ricky and Julian to talk about the importance of having goals in life.  And Ricky has one big fucking goal — in order to succeed, he’s been training, and he invented the world’s first salt and vinegar mop.

Oh – and if you’re downloading this from iTunes, make sure you rate the show and tell those Apple dicks how much you love it!

New on iTunes and Libsyn – The Jim Lahey Show and Randy, Episode 6! 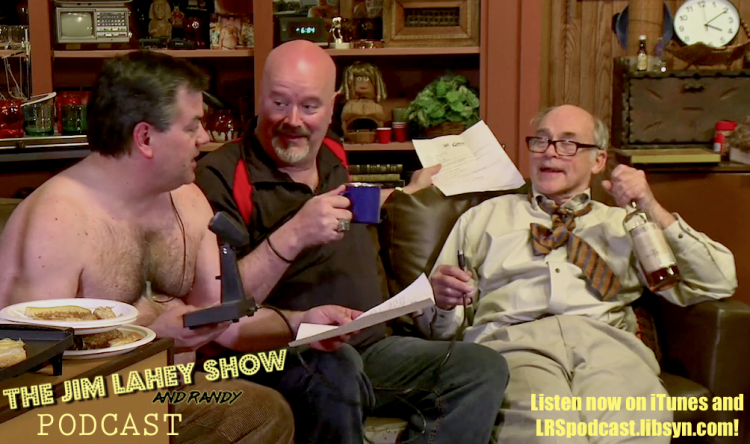 Sweet, sweet audio for your ears’ shit canal!  Episode 6 – “Hello, Young Lovers” of The Jim Lahey Show and Randy is now available on iTunes and Libsyn!

In this episode, a low-pressure shit vacuum pulls Halifax radio personality Bobby Mac straight onto the couch with Lahey and Randy.  Bobby tries some of Randy’s greasy French toast and offers a lesson on radio voice-overs.

This is a great opportunity to listen to SwearNet’s drunkest podcast on the go!  Tell your cheap fucking non-subscribing friends to sample SwearNet with this podcast, and while you’re at it, rate Lahey and Randy on iTunes and tell those Apple dicks how much you love them! 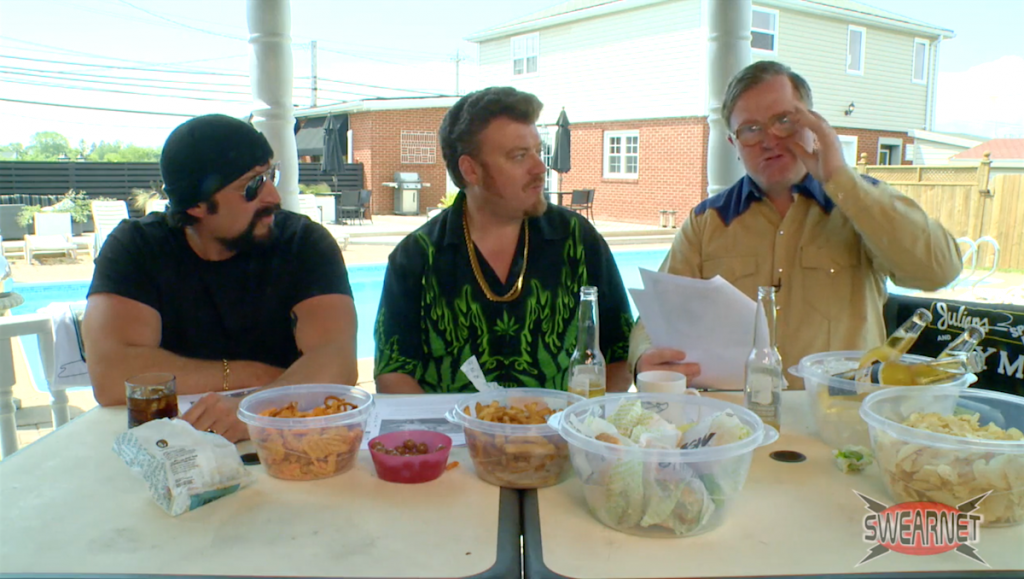 Hurry up and watch this podcash before the dick hotel manager kicks the Boys out!!

The Boys are back with a poolside podcast and they smoked some FUCKED dope before this one.  The Boys discuss the things that animals do that humans can’t, ideas for a new hairdo for Bubbles, and Ricky talks about the wonderful year that was 1948.

Plus – ever wonder what the arsehole kids called Bubbles on the playground?  Now’s your chance to fucking find out!

Check out the audio version of this podcast on Monday on iTunes and Libsyn!

Episode 47 is brought to you by the Official Trailer Park Boys Store, and Liquormen’s Ol’ Dirty Canadian Whisky! 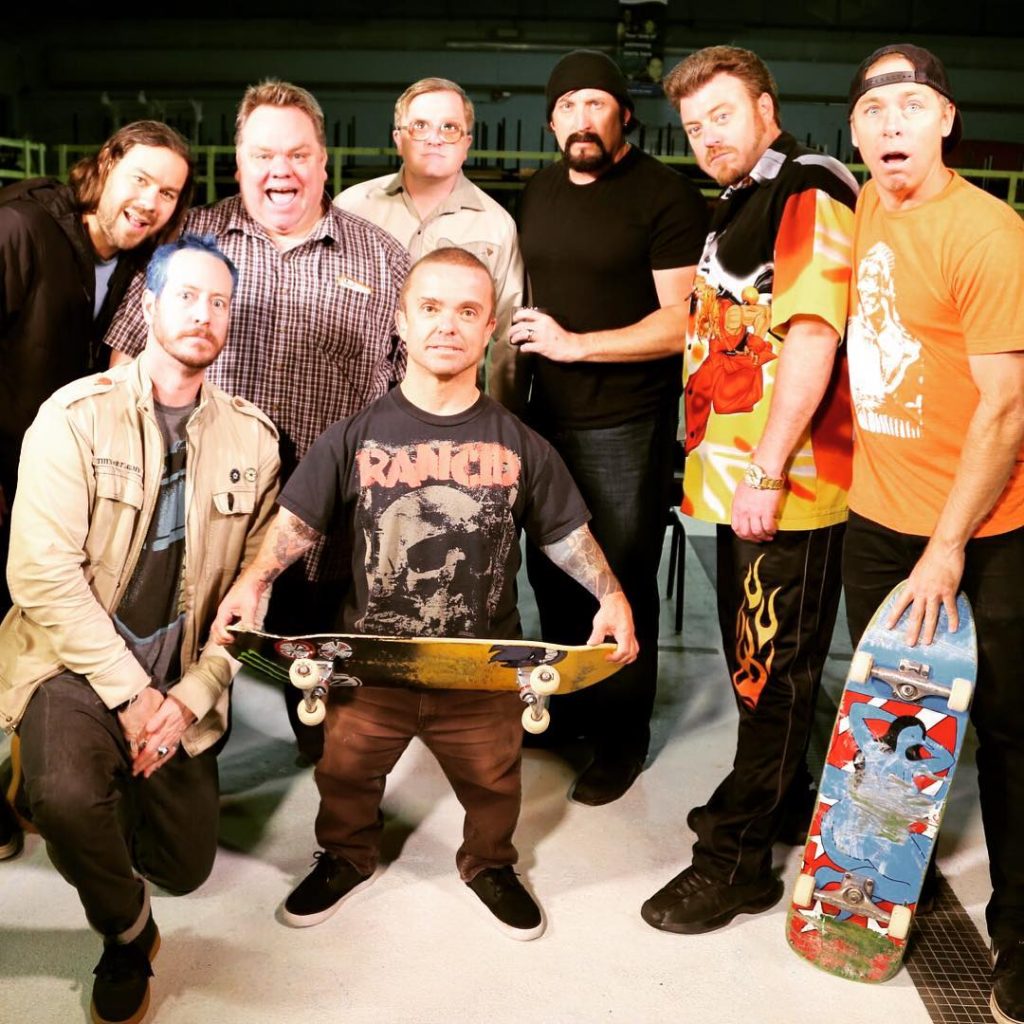 What happened when the Jackass crew met the Trailer Park Boys? A greasy fuckin’ horror show, that’s what!

You can listen to the new ‪‎#TPBpodcast‬ Jackass special on iTunes and TPBpodcast.libsyn.com now – and all you awesome SwearNet subscribers can watch the dirty ol’ video version at swearnet.com!