Toronto: Get Ready for a Taste of Freedom!

Freedom 35 is finally on the horizon!  The scrum-dilly lager has already been popping up in liquor stores across Canada, ahead of its official launch in Toronto on April 27th.  Ricky, Julian, and Bubbles will be at the Queen’s Quay LCBO branch on April 27th from 12pm til 3pm, signing autographs and taking photos.

The easy-drinking brew was developed by beer genius Paul Dickey and North American Craft, and early reviews indicate that she’s a DE-HEEE-HEEEECENT lager!  But we want to hear from you – please Tweet or Instagram us a photo of you enjoying a cool one with the hashtag #TPBFreedom35!

With Bubbles away on vacation (courtesy of Christmas-grinch-dick Julian), Ricky and Julian are ready to leave behind the hard boozing of the 21 days of Christmas.  The Boys are spending some time looking back at the great podcash moments of 2016 on the latest edition of the Trailer Park Boys Podcast – now available for free in audio form on iTunes and Libsyn!

There were many great highlights in 2016, with DECENT guests such as Ron Sexsmith, Scott Thompson, and Verne “Mini Me” Troyer!  There were also some lowlights, with shitty fucking guests like Lahey, Jacob, Randy, and Gorilla Fingers.

Plus: Ricky tries out the new art set he got for Christmas!

The Halloween episode of The Jim Lahey Show and Randy is now available for free download on iTunes and Libsyn!

Randy is pumped for Halloween, and he even has a special spooky burger ready for Randy’s Kitchen.  But for Mr. Lahey, the specter of Halloween 1977 is too much for him to handle and the LIQUOR takes over.

This episode also features a fucking awesome boat trip to Peggy’s Cove, Nova Scotia!  Your best bet might be to watch that cocksucker — the video version can be found here on SwearNet.com!

Aint that the way it goes.  One minute you’re having a hot one-night stand, the next, you’re… visiting the doctor.  On the newest episode of Cheap Smokes, Heather the samsquamptch is nervous that she might have a wee samsquamptch growing inside her!

A few short weeks ago, Heather was hungry for love, got herself a Tinder account, and found herself a man!  But in the heat of passion, she might not have taken the safest route, and now she’s left wondering what to do next!

And to make matters worse, she’s found a very suspicious lump… “down there.”  No question, her sexy man-child of a fucking doctor has his work cut out for him!

Is Heather in mortal danger?  Is Heather Jr. on the way?  Will her doctor survive his encounter with the ravenous samsquamptch?  Tune in and find out!

The launch of the Trailer Park Boys’ new Liquormen’s Ol’ Dirty Canadian Whisky was a huge success, thanks to everyone who came out to meet the boys and buy a bottle of that dirty, sassy liquor!

We’ll be uploading fan photos from the NSLC session next week; in the meantime, here’s what went on at the after-party at the Stubborn Goat gastropub in Halifax, NS… 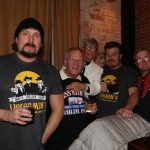 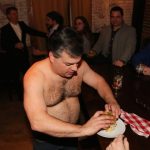 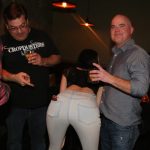 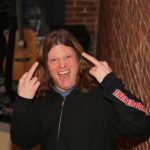 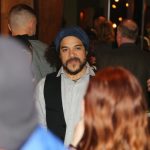 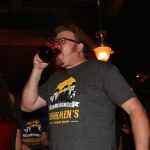 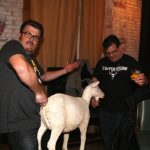 Robb and Pat make a friend 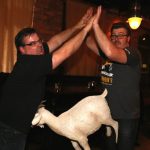